A Cabinet of Collectors 4: Dr John Hunter - the 'Knife Man'.


" My Italian Collection being now ariv'd, came Moulins the great Chirurgion to see & admire the Tables of Veines and Arteries, which I purchasd, & causd to be drawne out of several humane bodys at Padua:
I saw a private dissection at Moulin's."  so John Evelyn writes in his Diary for April 1649.

One of Evelyn's anatomical tables, from Padua, 1646
© Hunterian Museum, London

He purchased his four anatomical tables, the  dissected human veins and arteries preserved on panels of varnished oak, in 1646, after  watching three human dissections at the Padua anatomy school, and had them "transported into England, the first of that kind had ben ever seen in our Country, & for ought I know, in the World, though afterwards there were others".

The College of Physicians was very keen for Evelyn to donate these rarities to them, but he was only prepared to lend them for an annual Lecture, although by 1667 he felt able to present them to the Royal Society, "and are hanging up in their Repositary; with an Inscription;".    The remarkable panels were eventually given to the Royal College of Surgeons, where they are on display in the Hunterian Museum.

The museum is tucked away in Lincoln's Inn Fields,  based on the amazing collection of Dr John Hunter, the eighteenth century pioneering anatomist and surgeon.  3000 of his specimens, or preparations,  are now displayed in spectacular glass showcases* at the Royal College of Surgeons. Thousands more were lost during wartime bombing, but hundreds of  his original specimens, or  preparations, beautifully dried or preserved in formaldehyde, many in their original glass jars, are still in constant use today for the detailed study of animal and human anatomy. 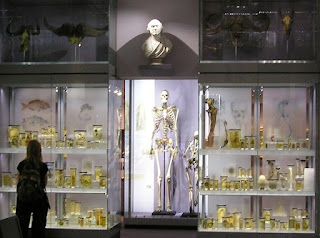 Visiting the Hunterian Museum, at the Royal College of Surgeons


The younger brother of Dr. William Hunter (founder of Glasgow's better known Hunterian Collection),  John worked as his brother's assistant dissectionist, and as an army surgeon, before setting up on his own, teaching and studying  anatomy, and researching new medical procedures.    He married well, and his surgical skills, together with his wife's fashionable salons for artists and intellectuals, brought him in touch with leading figures of society. 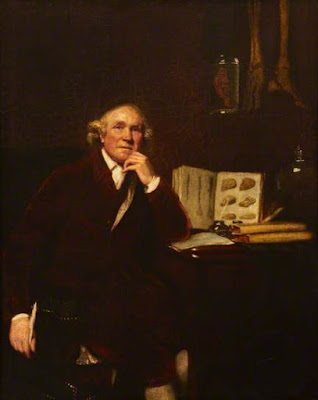 
He introduced several new surgical procedures, from his practical experiences and his anatomical researches, including a cure for Coachman's Leg, a contemporary industrial strain injury.  His collections included a menagerie, and paintings by William Hodges and George Stubbs, and Sir Joseph Banks collected specimens for him.

This preparation, a gift from Edward Jenner to his former teacher,  shows the embryo of a cuckoo, with the shell forming.  Hunter wrote to him: "don't think, try the experiment".

Rare preparation of a pig's epididymis.
By injecting the tightly coiled organ with mercury, Hunter was able to reveal its full length.    He was even asked to prepare anatomy specimens for teaching King George III's children.  The King appointed him Royal Physician in 1776. 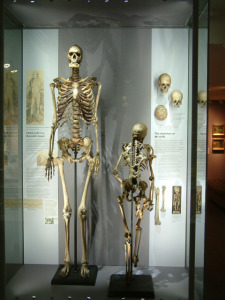 Hunter was determined to obtain the Irish Giant's skeleton, against Byrne's wishes, reputedly paying around £500 for it.  It now is lasting evidence of Byrne's actual height of seven feet, seven inches.

The collection has continued to explore surgical history and the amazing nature of the body, carrying on from John Hunter's original work.  Today you can wonder at the left (analytical) half of Charles Babbage's brain or Winston Churchill's all-important dentures, along with the pioneering history of Lister's antiseptics and Harold Gillies' plastic surgery, with films of today's brain and keyhole surgery, all learning from John Hunter's collection and his mantra, "try the experiment!"