The Street of the Peeverie Beds

"Hopscotch is the name English children give to this pleasant pastime.  Nothing to do with Scotland!  'To scotch' means to score, and the beds or boxes used in this game, as you know, are generally scotched or scored with chalk.
...
Peevers could be as old as Babylon - the great city! And certainly peever beds have been found scratched on the pavement of the Forum which was the centre of life in ancient Rome.
…
For me the first summer's day is when you can sit on a wall that's warm.  I love that season in my street, especially the sweltering Julys when the pavements get as hot as Nebuchadnezzar's furnace and blue beads of tar begin to bubble through the macadam.  That's ideal peevers weather. 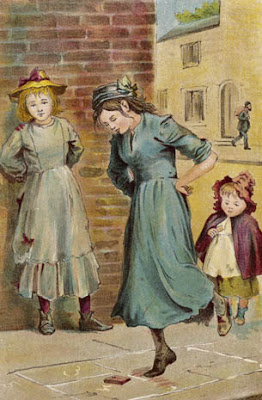 But a start is usually made by the lassies on the first sunny morning of spring.  They get right down on their knees then and draw fresh boxes. …all the numbers are figured in a vigorous style and the 'one' is always finished off with a carefree flourish of loops.  Passers-by often stop to watch:

'There on the pavement mystic forms are chalked,
Defaced, renewed, decayed but never balked,
There romping Miss the rounded slate may drop
And kick it out with persevering hop!'

The passerby who wrote that was Sir Alexander Boswell*, in a poem he made called 'The High Street of Edinburgh'. "


*Sir Alexander Boswell, poet and antiquary, was the son of  James Boswell, the diarist and friend of Dr Johnson.
James T.R. Ritchie was a teacher at Norton Park School in Glasgow.  A science teacher for 30 years, he  is best known for his poems and records of children's traditional street games and songs, and he collaborated in a seminal film, The Singing Street, in 1950.
Posted by E Berris at 11:43