"The approach to the house is a fine lawn, with sheep feeding upon it.  This gives you the idea of beauty blended with utility, which always produces agreeable sensations in the mind."
Memoirs of Mary Morgan 1791, A Tour to Milford Haven pub. 1795. 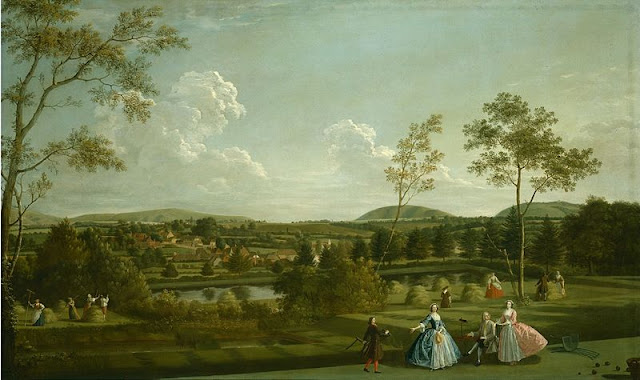 These idyllic scenes of Georgian gentry amid pastoral pursuits on their country estates, were just as carefully contrived (by painters and patrons) as Capability Brown's landscapes.  Haymaking was a popular subject, as village women traditionally helped to bring in this all-important harvest, adding colour and interest to the scene.  Here we see Edward Montagu and his wife Elizabeth, married two years earlier, with her sister Sarah Scott, enjoying the prospect from Sandleford Priory south across the river Enborne to Newtown and Beacon Hill.  Haytley has included a telescope in this painting, just as in his picture of the Drake Brockman family at Beachborough House, Kent. 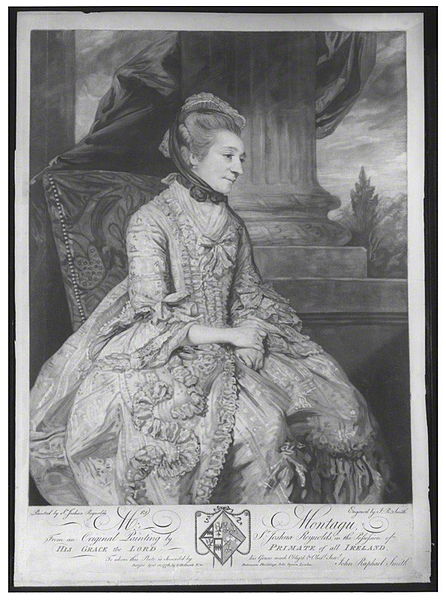 A mezzotint of 1776, after a lost portrait of Lady Montagu by Sir Joshua Reynolds
© National Portrait Gallery London

Elizabeth Montagu was left a wealthy widow in 1775 (Montagu's wealth came from Newcastle coal) and began updating the house and gardens.  She employed James Wyatt to link the house and the ancient Priory chapel.  He created a beautiful octagonal drawing-room with antechambers, linking the two buildings;  previously the old chapel had provided spare bedrooms if there was an overflow of guests, such as Hannah More and other members of Lady Montagu's "Bluestockings" circle. Sandleford would be a convenient stopover en route to Bath.

Lady Montagu was called "the Queen of the Bluestockings" by Samuel Johnson, for her literary salons held at Montagu House in Mayfair. Here there was no dancing, cards, or alcohol, but tea and lemonade to refresh the witty and intellectual conversation discussing the arts and ideas (but not scandal or politics) with women equal among men.  Fellow leading bluestockings were Mrs Elizabeth Vesey and Mrs Frances Boscawen, ladies of wealth and education, and guests at their salons included Edmund Burke, Mr and Mrs David Garrick,  Johnson, Fanny Burney and the Thrales, Horace Walpole, Reynolds and many women writers and philanthropists.  Promoting and supporting women's right to education, and to publish their work, was one of their leading concerns.

Capitalizing on their reputations, in this painting Richard Samuel has included Lady Montagu, "Queen of the Bluestockings" seated centre right, with Hannah More behind her, Angelica Kauffman at her easel, and Elizabeth Carter the poet and translator of Epictetus far left behind her. 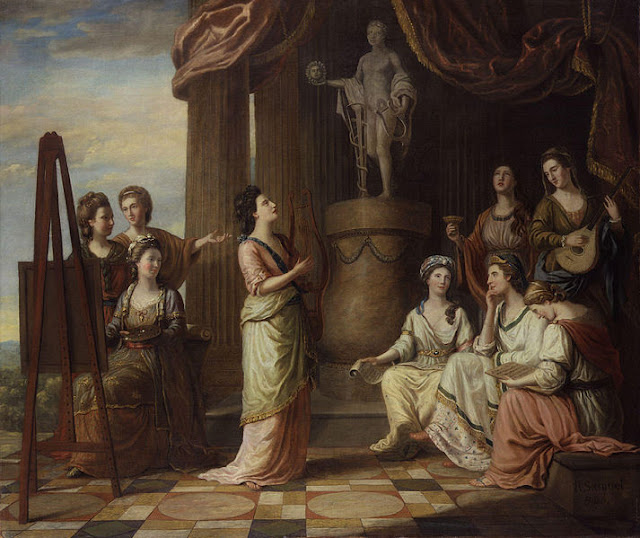 It was Hannah More who wrote the comic "blue-stocking" poem The "Bas Bleu", or Conversation*, in praise of Mrs Vesey, published in 1784, but the name was probably begun by Mrs Vesey apropos of the retiring botanist, Dr. Benjamin Stillingfleet. He could not afford the black or white silk stockings expected for such social occasions, but was told by Mrs Vesey to turn up in his blue worsted hose, (blue being a cheap practical colour popular for servants, tradesmen and charity schoolchildren).
He "rendered himself so entertaining that the ladies used to delay their discussion until his arrival, declaring - 'We can do nothing without our blue stockings' - whence the bas bleu. "

Lady Montagu was herself celebrated in a poem by William Cowper,  in which he describes  her London salons as like a haven for exotic birds:
"The birds put off their feathery hue
To dress a room for Montagu……

These were large rainbow-coloured woven feather screens "from gaudy peacock to solemn raven" astonishing even in her palatial Portland Square house, and Cowper compares her writers and intellectuals to the rare birds represented:

"All these to Montagu's repair,
Ambitious of a shelter there.
There Genius, Learning, Fancy, Wit,
Their ruffled plumage calm refit,
…
And in her eye, and by her aid
Shine safe without a fear to fade."
On Mrs Montagu's Feather Hangings*  William Cowper 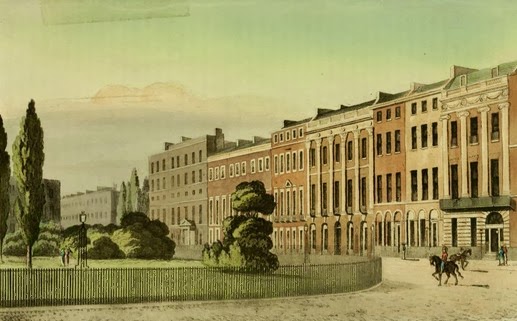 The summers at Sandleford were spent in a simpler bucolic mode.  Philanthropic with her wealth in London and in the country,  Lady Montagu revived harvest suppers and entertainments for servants and tenants, and was a generous local benefactor. Yet she remained a lady of rank, enjoying from a distance the labours of others.  She writes to Mrs Vesey in July 1786:

"I now inhabit [my new dressing room] with great pleasure: each window of the Bow presents a most delightful pastoral scene, which was yesterday rendered more gay by 33 Women and girls singing while they were weeding and picking up stones.   My heart….sympathised in their cheerfulness".

This is also Watership Down country.  One childhood exploration took us along a cart-track past haystacks and between the  fields of corn. Tiptoeing into shady coppices where Solomon's seal grew, it was so utterly silent that a startled wood pigeon  taking off would make us jump with fright.  Eventually we would see Sandleford Priory on the skyline. 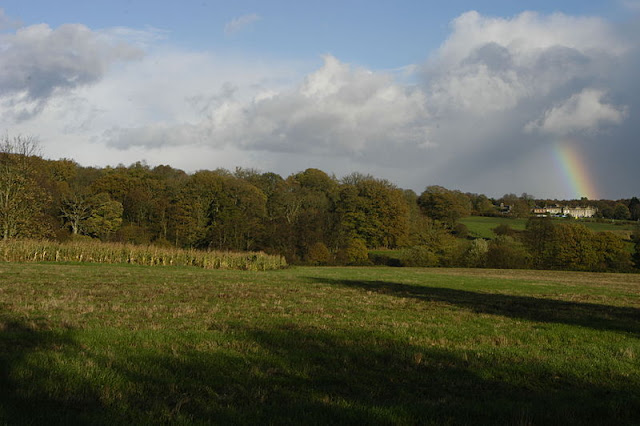 It seems appropriate that Elizabeth Montagu's country home at Sandleford, where she supported women's learning, should have become a thriving girls' school.

*Both Hannah More's and Cowper's poems can be enjoyed on poemhunter.com.
For a fascinating study of women's lives, I recommend Behind Closed Doors, at home in Georgian England, by Amanda Vickery.