If there was a category on the BBC show "Pointless" on famous eighteenth century sculptors in Britain,  I would be able to name John Flaxman, and on a very good day perhaps another,  but who was  John Bacon the elder,  RA.?  He would surely come up as a "pointless" answer,  for even though his many statues and sculptural monuments can be seen around us -- in St Paul's Cathedral, Westminster Abbey, at Somerset House, or Guy's Hospital, in churches and in  Oxbridge Colleges, in the provinces and in the colonies, yet his name is not widely known. 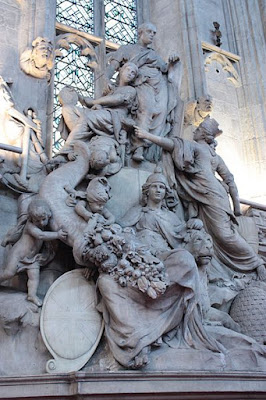 He died on 7th August 1799, aged 58, and was buried in Whitfield's Tabernacle off Tottenham Court Road, composing his own epitaph:


"What I was as an Artist
Seemed to me of some importance
While I lived;
But
What I really was as a Believer
In Christ Jesus,
Is the only thing of importance
To me now."

It was while looking for information on the anonymous writers of those elegantly-expressed Georgian epitaphs that you find in our churches and churchyards, that I stumbled across his name:

"for sensible of religion himself, [John Bacon] composed a variety of epitaphs for churchyards, and wrote sermons and fables, which do not appear to have been printed."

He is said to have had a hand in composing the inscription on his other monument to Lord Chatham in Westminster Abbey, having  "waited a considerable time for the inscription, which had undergone so many alterations, that at last he was bold enough to venture on its completion himself, which, with his usual diffidence, he submitted to the consideration of his employers, and his proposed completion meeting their entire approbation, it was accordingly ordered to be cut upon the tablet."

Clearly a practical as well as a creative man, but it his resilience I admire.

Born in November 1740 to a Southwark clothworker, as a boy, according to one chronicler, "after having fallen into the pit of a soap boiler, and been run over by a loaded cart, he recovered health enough to assist in his father's business".
At fourteen he was apprenticed to a porcelain factory, where he developed his modelling skills, and began to imitate the established sculptors' clay models, which were sent to be fired in the potters'  kilns.  His models won prizes from the Society for the Encouragement of the Arts, and from 1769 he was employed by Mrs Coade in her artificial stone works at Lambeth (approximately where the National Theatre now stands), where he became chief modeller and director. 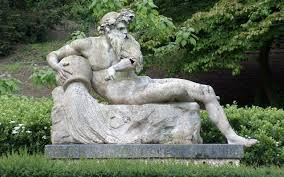 This large figure of Father Thames is made of Coade stone, catalogued in 1784 as  "A River God, 9 feet high, with an Urn through which a stream of water may be carried (100 gns)".  Like countless visitors entering Ham House in Richmond I have admired it in passing, but never knew it was the work of John Bacon.   There is a large collection of other surviving Coade stone sculptures at  Croome Court in the care of the National Trust. 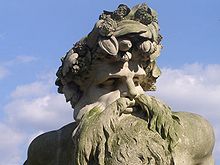 He used this Father Thames figure again for the base of his statue of George III in the courtyard at Somerset House - but how many also look up at Bacon's sculptures decorating the facade? 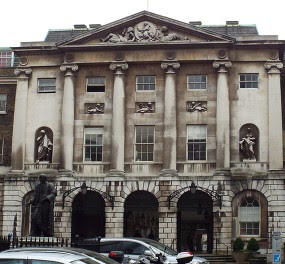 ….Or know that this is also his work up above our heads? 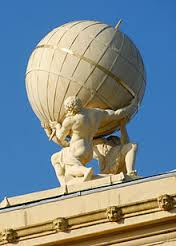 He had a very successful career and two sons followed him into the business,  with an extensive works in Newman Street;  and he was elected RA in 1778.  Maybe his name is less famous because his work is mainly around us on public view everyday, more than in private and museum collections; in his early career he would be seen as something of an outsider, who was largely self taught, and although he won medals,  not academically trained in sculpting marble.  He would also be linked with trade, producing replicated figures in artificial stone.


But he overcame his background, literally carving his way out of Southwark, to become a leading public figure in the arts:

"There touch'd by Reynolds, a dull blank becomes
A lucid mirror, in which Nature sees
All her reflected features, Bacon there
Gives more than female beauty to a stone,
And Chatham's eloquence to marble lips."

Bacon was also fittingly commemorated by the Victorians, beside other renowned artists, in a portrait statue by W. Frith, which can be clearly seen on  the exterior of the V&A Museum today.