Although Jean, Duc de Berry, brother of the French king Charles V, was an important figure in the 100 Years' War  between France and England (from the Edward the Black Prince to Henry V),  his international fame is based on his patronage of the arts, most particularly for his exquisite Book of Hours, the Tres Riches Heures, and its 12 monthly Calendar pages painted in glowing colours by the Dutch brothers, Paul, Jean and Herman Limbourg, around 1412-1416. 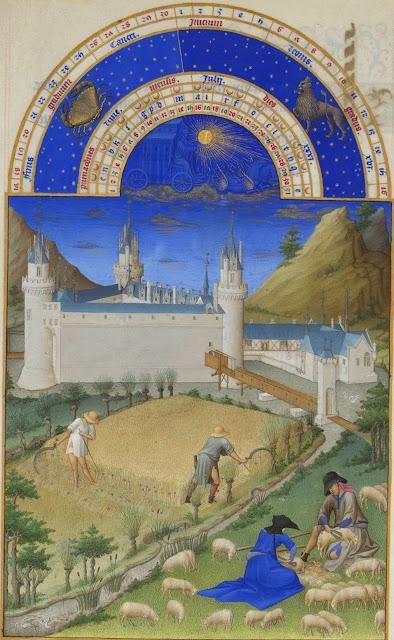 Here two larger-than-life reapers are cutting the corn, one of whom is cutting out the poppies and cornflowers, beside the river Boivre with its swans, reeds, and pollarded willows, while on the other bank sheep are being sheared.  In the background is the famous triangular castle of Poitiers, one of the Duke's many castles which are shown in most of these monthly calendar pages.  He renovated and extended the existing castle, adding two more towers, which the artist has portrayed in its finest International Gothic style. The zodiac signs above show Cancer the Crab waning and Leo the Lion ascending, while the Sun is pulled by the god Phoebus, with his carriage.


Strategically placed at the confluence of two rivers, midway between Paris and Bordeaux,  Poitiers was an important fortress and town in Aquitaine.  In 1356 the Duke's father, King John II had been captured 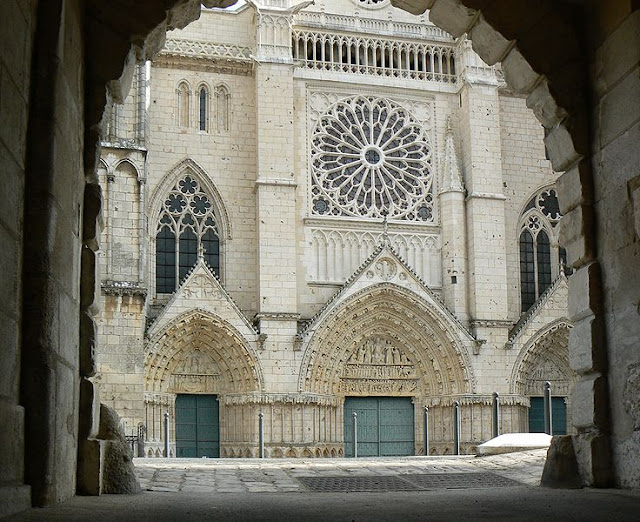 by the English, led by Edward III's son the Black Prince, at the Battle of  Poitiers, and eventually died in England.  As an elder statesman almost sixty years later, Duke Jean wisely persuaded his nephew Charles VI not to take part and risk capture at the Battle of Agincourt in 1415.

While Jean de Berry was Count of Poitiers, and a discerning collector and patron, the town also grew as a centre of art and learning.    With his revenues from Poitiers and produce from his many other domains, like wheat, wool, meat and wine, he could afford to employ the best illuminators and provide them with the finest materials.  The vellum pages of his Tres Riches Heures are each cut to size from the centre of best calfskins, with no ragged edges or noticeable blemishes, and the piercing blue of the zodiac calendar and the shearer's robe  (that rich colour on a peasant an artistic device) would be from rare imported ultramarine*.

Both the Duke of Berry and the Limbourg brothers died in 1416, probably of the plague, and his wonderful Book of Hours was completed by other leading artists later, passing to his descendant by marriage,  Margaret of Austria, Regent of the Netherlands in the 1500s.   She was also a discerning patron of the arts, with careful inventories of her collections, but the Duc de Berry's jewel of a manuscript then disappeared from record, only resurfacing in Genoa in the nineteenth century.   It was purchased by Henri d'Orleans, Duc d'Aumale in 1856 and bequeathed to the Institut de France.  Now its dazzling images can be enjoyed around the world, thanks to those French peasants labouring in the fields every month.

"All over the intelligent world was spread this bright, glittering, joyous art, which had now reached its acme of elegance and beauty."
William Morris on International Gothic art.

*Ultramarine was sourced from Afghanistan lapis lazuli, at huge expense, so some blues may be copper-based azurite, although Duke Jean did own two pots of ultramarine.
Posted by E Berris at 00:57