Hetty Dorval - " a woman of no reputation"

Let us put all the continuing travails of Brexit and Europe into a wider historical context.
Hetty Dorval, a coming of age story by the Canadian writer Ethel Wilson, published just two years after the end of World War II, has one of the most chilling endings to a novel I have come across.

A young Canadian teenager, Frankie Burnaby just twelve, relates how her quiet family life in rural British Columbia is transformed by her secret friendship with a new arrival from Shanghai:  Hetty Dorval, a glamorous young woman with a mysterious past.  Hetty is to turn up again at  key moments in Frankie's life. 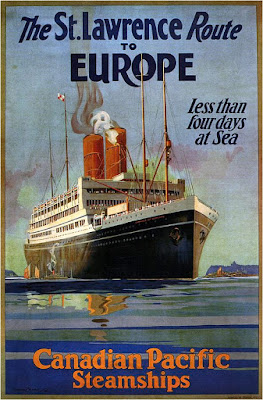 Frankie is too innocent to realise what Hetty is until her parents explain that this visiting must end, for Mrs Dorval is regarded as "a woman of no reputation", ugly stories having followed her across the Pacific.

"In my mind, seeing Hetty's pure profile and her gentle smile, I said to myself that Father couldn't have believed these things if he had seen her himself. But a sick surprised feeling told me it might be true."

When Frankie is sixteen her mother takes her to England  to complete her education. Among the ship's passengers is Hetty, now engaged  to marry an elderly General, and she appeals to the Burnabys' generosity not to mention rumours of her past and destroy her chance of real security.

Frankie then lives with her uncle and cousins Richard and his young sister Molly in Cornwall for two happy years of growing up.  "As I look back, I  don't know where my liking for Richard began or ended.  I accepted my liking or love for him without question.  It was all natural and completely young and happy. Nothing spoiled the confidence and harmony of our lives together whether we were apart or whether we were all together in Cliff House by the sea."


But Hetty, now widowed, turns up again in London and charms Frankie's cousins completely, just as she had bedazzled young Frankie. 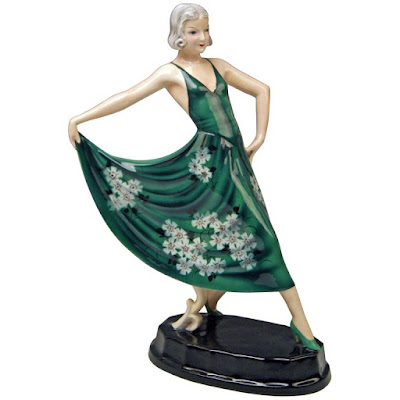 "I thought of others in whom goodness was as visible as green, but it was not visible in Hetty."
(Dancing figurine,  Stephan Dakon for Goldscheider Vienna, 1936-7)

Frankie, finally grown up, and learning the truth of the emotional wreckage Hetty caused in Shanghai, confronts her, determined to protect the cousins she loves.  True to form, Hetty simply walks away from an unpleasant "complicated" situation.  When Frankie sends her packing, she goes off to Vienna with a rich admirer.   The ending is quite sudden:

"As I watched with satisfaction Hetty going down the narrow stairs I knew that before she had taken three steps she had forgotten me and she had forgotten Richard.  She was on her way.
Six weeks later the German Army occupied Vienna.
There arose a wall of silence around the city, through which only faint confused sounds were sometimes heard."