"The world ends at  the pier, the purple snake
of the river vanishing into sunset, though
somewhere beyond, locked like a secret, another
existence begins -- with laws of its own
and a brotherhood because of no other, begun
when the coast is shed in the wake like a skin.

But, tied to the riveted stakes of habit, barges
copper as souvenirs of Egypt, pull and return
with the tide on a backspring, lazily large
for a day at their moorings, with money to burn
in the pockets of dockers, or sailors living
a one-night week, the rest an endurance.

It depends on the night, for nothing is lasting --
neither profit nor pleasure, which flare up
like a fire and founder as damply at leisure
--and unless you were there and looked up
catching the spark in its diamond of laughter,
nothing would remain to witness it later.

For sailors and waterfronts like Chinese boxes
hide away in layers behind unsmiling secrets
and carry different faces on Sundays
and Mondays, their surfaces ambiguous as foxes,
who snarl at themselves in a pool when frightened,
afraid of the trick that might prove them a fool.

Life here, as its environs, is precarious--
a world built up like a matchstick warehouse,
a mixture of spices and sawdust, timber
and sacking, that grows dormant at sunset
or lights up at sunrise its debris of history,
but where never a stable perspective is lacking. 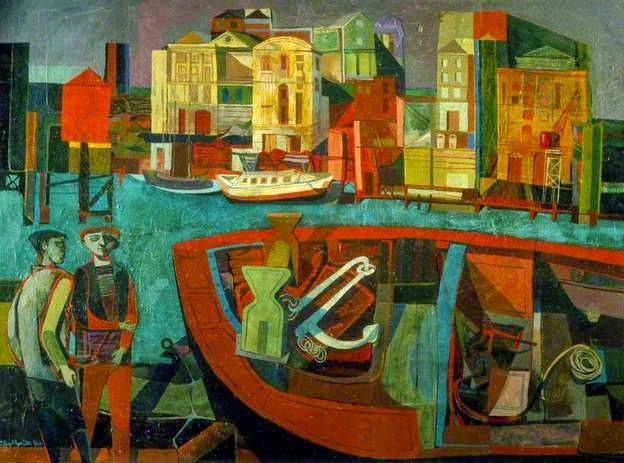