Floor model Albion Press No. 6551, made by Hopkinson & Cope 1891, and used at the Kelmscott Press to print Morris's edition of Chaucer's Canterbury Tales. 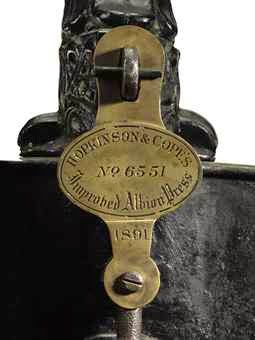 "When I first knew Morris nothing would content him but being a monk, and getting to Rome, and then he must be an architect, and apprenticed himself to Street, and worked for two years, but when I came to London and began to paint he threw it all up, and must paint too, and then he must give it up and make poems, and then he must give it up and make window hangings and pretty things, and when he had achieved that, he must be a poet again, and then two or three years of Earthly Paradise time, he must learn dyeing, and lived in a vat, and learned weaving, and knew all about looms, and then made more books,  and learned tapestry, and then wanted to smash everything up and begin the world anew, and now it is printing he cares for, and to make wonderful rich-looking books and all things he does splendidly -- and if he lives the printing will have an end -- but not I hope, before Chaucer and the Morte d'Arthur are done; and then he'll do I don't know what, but every minute will be alive."