Key moments in Shakespeare's plays include the eve of battle scenes in Richard III and in Henry V.  Before Agincourt, Henry walks around the camp incognito, in a borrowed cloak, testing the mettle of his men and himself:

Erpingham: Not so, my liege: this lodging likes me better,
Since I may say, 'Now lie I like a king'. 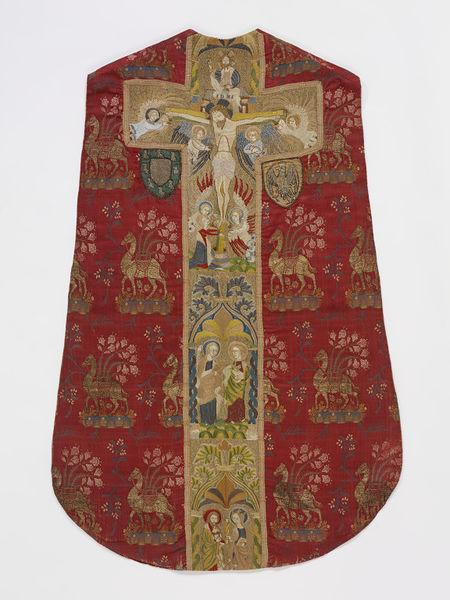 
When Henry borrows the cloak from Sir Thomas Erpingham, his senior commander who drew up the English line at Agincourt,  I am reminded of this medieval priest's chasuble, bearing the shields of Sir Thomas under the arms of the embroidered cross (the orphrey).

It was made from the most luxurious fabric available, woven silk from Italy, here unusually portraying exotic camels with panniers of flowers,  and made suitable for religious use by applying a panel of English silk and gold thread embroidery, (opus anglicanum *).  This is the rear view of the chasuble, which would be seen when the priest celebrated mass.  Sometimes chasubles were cut down from a much larger cloak, or cope, deriving their name from the Roman soldier's enveloping cloak - or casula, little house.
I like to think it was so in this instance, linking cloaks for kings, soldiers and priests.

*see the current exhibition at the V&A Museum.
Posted by E Berris at 01:24