April: the stones of Avebury, "a more delightful indagation"

"…I drove with Eardley straight to Avebury.  He took me round the Circle.  He is madly keen on Avebury and rather peevish about my lack of enthusiasm and disrespect for the ugly stones which Keiller* has dragged from the ground into the light of day.  I cannot approve of the proposal to destroy the old village inside the Circle.  I admit that the empty sections of the Circle are impressive where the terraces have been cleaned of scrub and are neatly cropped by sheep; but to remove medieval cottages and clear away all traces of habitation subsequent to the Iron Age seems to me pedantic and a distortion of historical perspective.  We walked round the Manor garden.  Eardley was bored by the house because it is not classical and is romantic. Today's fashionable distaste for the romantic in English country houses is as overemphasised as was the Edwardians' for the classical and regular.""


It was John Aubrey, writer and antiquarian, whose careful study of the Avebury henge brought it to the attention of scholars.  Later travellers like Celia Fiennes and John Evelyn would record their visits to Stonehenge, but Avebury's apparently random stones were not widely noticed or remarked upon before 1649 when Aubrey chanced upon them during a hunt;  he stopped to look more closely and caught up with the hunt later.

"The morrow after Twelfth Day Mr Charles Seymour and Sir William Button met with their pack of hounds at the Grey Wethers….
'Twas here that our game began and the chase led us at length through the village of Avebury, into the closes there: where I was wonderfully surprised at the sight of those vast stones of which I had never heard before; as also at the mighty bank and graffe [ditch] about it .  I observed in the enclosures some segments of rude circles, made with those stones, whence I concluded they had been in the old time complete.  I left my company a while, entertaining myself with a more delightful indagation [investigation]: and then (steered by the cry of hounds) overtook the company, and went with them to Kennet, where was a good hunting dinner provided."  7th January 1649 (from his Monumenta Britannica ms.)

John Aubrey, engraving by C.F. Wagstaff after a drawing by William Faithorne, c. 1666 in the Ashmolean Museum

Aubrey gave Charles II a personal tour of the Avebury stones during the King's progress to Bath in the summer of 1663, just as James I  on seeing Stonehenge in 1620 had asked his Royal architect, Inigo Jones, to research the origins of that monument.

"I brought with me a draught of it donne by memorie only; but well enough resembling it, with which his Majesty was pleased: gave me his hand to kiss, and commanded me to waite upon him at Marlborough when he went to Bath with the Queen (which was about a fortnight later) which I did: and the next day when the Court were on their journie, his Majesty left the Queen and diverted to Avebury where I showed him that stupendous antiquity with the view thereof.   He and His Royal Highness the Duke of York were well pleased."  John Aubrey 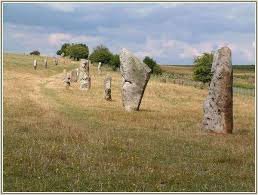 In the seventeenth century, both Stonehenge and even more so Avebury's circles were in poor condition, with their sarsen stones buried, broken and removed; at Avebury they had been incorporated into village houses and the surrounding ditches filled in.  Nevertheless, the Royal visit put these  mysterious ancient monuments on the map for wealthy educated travellers.

Salisbury Plain was "eminent for many barrow or butts that are thick all over the plaine, and this of Stoneage, that is reckoned one of the wonders of England how such prodigeous stones should be brought there; ...  the story is that none can count them twice alike, they stand confused;"  Celia Fiennes, c. 1680s

Celia Fiennes counted only 91 but John Evelyn with difficulty counted 95 in July 1654, and thought  these sarsens were brought from Avebury.  In his Diary he describes the rural landscape, "for evenness, extent, Verdure, innumerable flocks, to be one of the most delightful prospects in nature and put me in mind of the pleasant lives of the Shepherds we reade of in Romances and truer stories:"  He also  mentions the barrows and mounds in the vicinity, as "antient intrenchments, or places of burial after bloudy fights:"

Indefatigable Samuel Pepys visited both Stonehenge and Avebury in June 1668. Like his friend Evelyn  he comments on the countryside: riding "over the downes, where the life of the shepherds is, in fair weather only, pretty",  and believes the profusion of stones around easily supplied both Stonehenge and Avebury.  He is told the legend of Silbury Hill, so called from one King Seale buried there, and sees from his coach, "one place with great high stones pitched round, which, I believe, was once some particular building, in some measure like that of Stonage".

Even older than Avebury and Stonehenge is the West Kennet Long Barrow, a neolithic burial chamber c. 3650 BC.  Excavations in 1955-56 found it to have been used for burials for around a thousand years, at which period the entrance had been blocked off.   I went inside with a history group on a field trip once and it was a very eerie experience which I would not really wish to repeat.

* The revival of the Avebury complex is the result of Alexander Keiller's efforts to rescue and restore the stone circles and avenues in the 1930s,  and the history of the stones and his years of work is on view in the Manor House museum.  Objects he found while excavating the stones run from very early pottery shards through Roman coins and later carvings, to a piece of a Keiller's marmalade pot from 1900, found while digging up stone 14.  However, in his process of recreating the ancient site, the buildings and history of many later centuries were swept away.  James Lees-Milne's comments on the method Keiller chose are still a matter of controversy today.