Tucked away downstairs in London's National Gallery is a mysterious little painting, entitled  Death and the Maidens. It is an oil sketch for a large painting, now in the Clark Institute collection, and was inspired by a Schubert song* from 1817, later part of his famous string quartet No 14.

The young maiden begs fierce Death to pass her by,
"Go Fierce Death, I am still young, Please go, and do not touch me";
but Death replies that he is gentle:
"Give me your hand, Be of good cheer, I am not cruel, You will sleep softly in my arms". 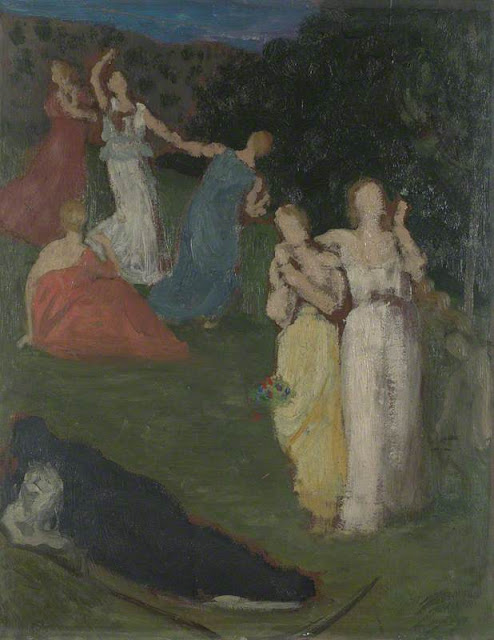 The very fact that this is a sketch, while the artist is thinking his theme onto the canvas, gives it this sense of mystery, with the black-robed figure of Death loosely indicated in the foreground and a shadowy maiden stooped in the background.
As seen in the finished painting below, the theme is here clearly portrayed in Puvis de Chavannes' typical classicised Arcadian style, the sunlit maidens are enjoying the bloom of youth, gathering flowers, while Death lies apart, resting from his reaping; yet despite the clarity in its painting, that sense of enigma remains. 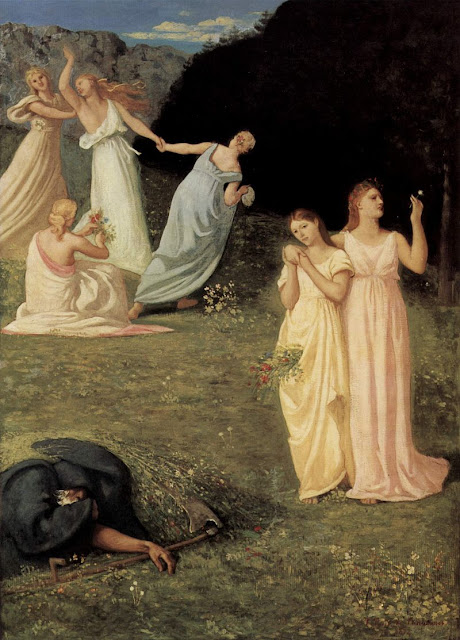 Puvis de Chavannes could also create drama and strong movement on the canvas, as in this painting of St John's beheading, with the same style of strong flat colour and clear outlines. 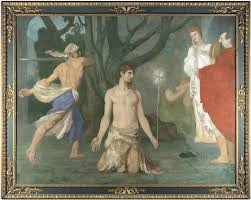 In his lifetime, he was famous as a painter of monumental murals, in the style of Italian frescoes, such as Summer, painted for the entrance of the Musee d'Orsay, Paris 1873, or the Muses of Inspiration murals, installed in Boston Public Library in 1895,  and he was admired by the symbolists for his allegorical  classical scenes.

The painting below is based on his mural commissioned for his home town of Lyons, for their Musee
des Beaux-Arts.  It was his practice while the actual murals were on exhibition prior to installation to create a smaller easel version.

With his close friend Rodin, together with sculptors Jules Dalou and Eugene Carriere, they founded the new Societe Nationale des Beaux-Arts in 1890;  Puvis de Chavannes was its first president.  After his death in 1898, his style went out of fashion and over time his widespread influence was gradually forgotten. 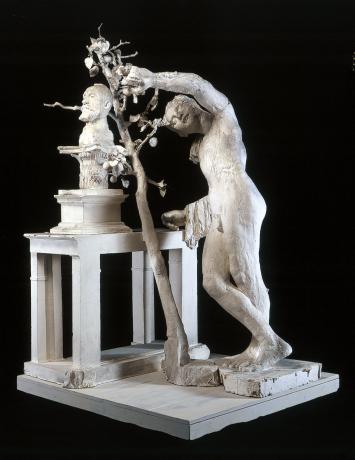 Rodin designed this classically inspired and symbolic monument as memorial to his friend, although it was never cast. His portrait bust of Pierre-Cecile stands on antique architectural fragments, with the Spirit of Eternal Repose (a figure from Rodin's "Gates of Hell" inspired by Dante's Inferno and the classical statues in the Louvre) leaning against an apple tree, in Greek myth those apples of Hesperides which gave immortality.

Rodin's attributed last words were: "And it is said that Puvis de Chavannes is not beautiful".

*from Death and the Maiden poem by Matthias Claudius.
Posted by E Berris at 10:42