Fifth of November: the "never to be forgotten delivery of this day"

The foiled attempt to blow up Parliament in 1605 was celebrated through that century with services of thanksgiving on November 5th, as John Evelyn records 350 years ago:

"Our Viccar preached on 121 Psal: 4 - [Behold, he that keepeth Israel shall neither slumber nor sleep] -shewing the gracious effects of Trusting in God. &c: his universal Vigilancy for his Church:" Diary   1667
He had lived through London's Great Fire in 1666, which destroyed the late medieval St Paul's and he would see its rebuilding in Wren's neoclassical Baroque design, the great dome replacing the old tower on the City skyline. 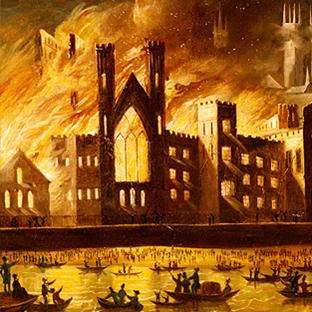 The Houses of Parliament on fire,  16th October1834
see artinparliament.uk

The old Westminster Palace buildings were eventually destroyed by fire, caused like the 1666 fire by human accident, when the burning of thousands of old revenue tally sticks got out of control.

"…I, indisposed… could not go to Church this day, to my great sorrow, it being the first Gunpowder conspiracy Anniversary, that had ben kept now this 80 yeares, under a Prince of the Roman Religion: Bonfires forbidden &c:  What dos this portend ? "  Diary 1685

"Mr Stringfellow preached at Trinity Church on 2 Cor: 1.10:   [Who delivered us from so great a death, and doth deliver: in whom we trust that he will yet deliver us;]   This Festival was celebrated with Illuminations, that is by setting up innumerable lights & candles in the windows towards the streete, in stead of Squibbs & Bonefires, much mischiefe having ben don by Squibbs:  Illumination was the custome, long since in Italy [& France:] & now introduced here:
The Parliament now sate:"  Diary 1691

In contrast to St Paul's Cathedral, the Palace of Westminster was rebuilt in the Gothic Revival style, looking back to our national heritage, and so those two iconic London landmarks  were shaped by fire, genius, and contemporary attitudes.
Posted by E Berris at 05:22