October Labours: "And I sow my whete so rede (red)"


October is still the month when in the northern hemisphere we prepare for the winter ahead.  In medieval Europe the essential  second sewing of winter wheat or rye took place,  pigs were fattened on fallen acorns or mast before killing, and wood was stored for ovens and stoves.

In the scene below, ploughing and sewing seed for winter wheat takes front of stage: the skilled sewer will first have measured out the steps per furrow, so that the precious grain is broadcast evenly by handful per number of steps.  The harrow was used to loosen and then rake over the soil to protect the seed from eager birds.  In the background, a man is knocking down acorns or nuts to fatten the pigs rooting among the dead leaves and autumn fungi. Peasants would pay "pannage" for the right to forage their pigs in the landlord's woodland. 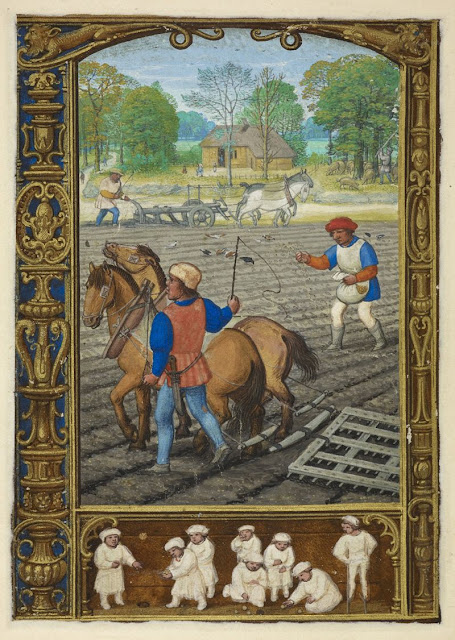 In the Golf Book of Hours, this is in fact the illustration for September, with October devoted to the vintage.   Other calendars also show the grape harvest in October,  with winter wheat sewing and pannage activities spread across the three autumn months, according to regional climate and custom.

This decorated calendar page for October  emphasises the all-important autumn ploughing and sewing, to provide grain through the late winter months.  It also includes the zodiac sign of Scorpio against the same fertile landscape. 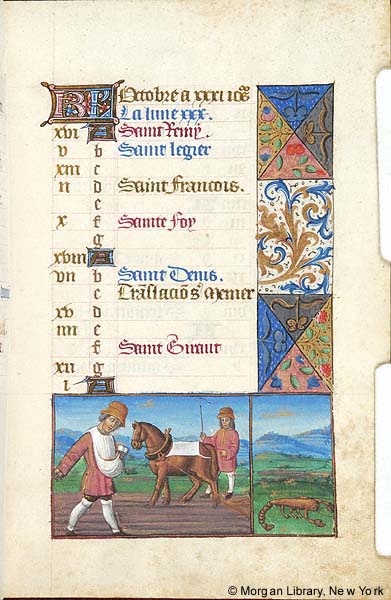 And this cheerful, fifteenth-century stained glass Labour for October makes the harrow and the evenly scattered seed into a decorative pattern. Notice the extra large sack of seed,  all part of the pattern, along with the mettlesome horses and the fortified city. 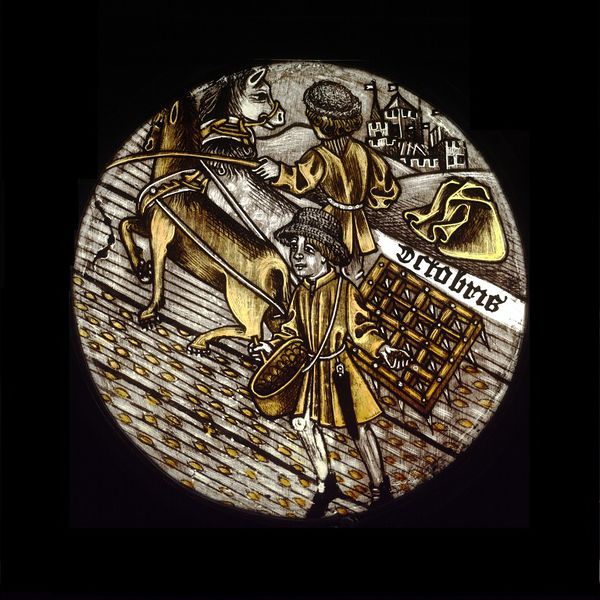 Painted and stained glass roundel, unknown maker, English c. 1450-75, probably based on woodblock engraving.  The skilled artist has used scratching, stippling and smearing of the brown pigment for shading and emphasis.
© V&A Museum