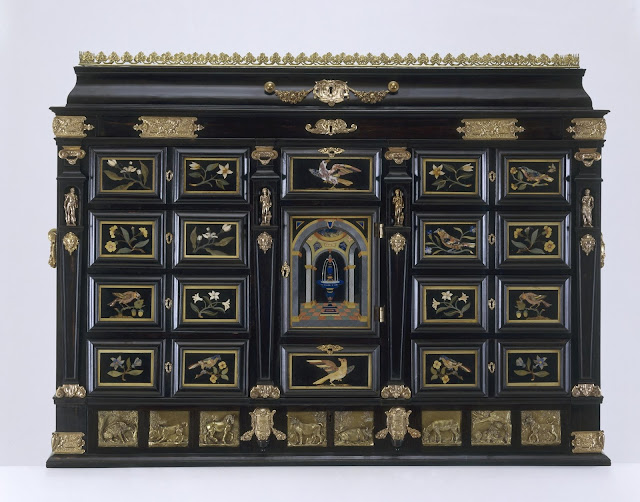 It was the historicizing late Georgians who embellished this famous seventeenth century collector's display cabinet with the gilded crest, handles and extra gilt bronze mounts. Imagine it as a rather plainer black frame for an early Grand Tourist's finest souvenirs from France and Italy. The young  John Evelyn had it made  to show off the 19 hard-stone mosaic plaques which he purchased during his stay in Florence in 1644. When back in England he also acquired the four classical figures and eight bronze animal plaques from Francesco Fanelli's workshop; and the drawers would be suitable for the smaller manmade treasures and natural curiosities of his collection.

He was very taken by the fashionable Cabinets of Curiosities - both whole rooms and items of furniture, which he saw on his travels,  describing those in the Palazzo Vecchio Tribune:  "a Cabinet of an octangular form so adorn'd and furnished with Christals, Achat, Sculptures &c as certainly exceeded any description…Likewise another which had about it 8 oriental columns of Alabaster on each whereof was placed an head of a Caesar, cover'd with a Canopy so richly beset with precious stones, that they resembled a firmament of Starrs:…"
Here Evelyn saw the "incomparable tables of Pietra Commessa, which is a marble ground inlaid with several sorts of marbles and stones of divers colours:"...  some by the leading artist, "Domenico Benotti, of whom I purchased 19 pieces of the same work for a Cabinet. "  He may have been dazzled by all the Medici treasures and curiosities,  but he was not taken in by "an Yron-naile, one half thereof being converted into gold by … a German Chymist,  look'd on as a greate rarity [but it plainly appears to have been but sother'd]". 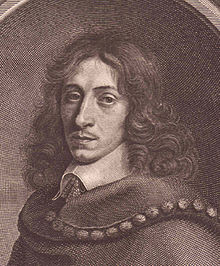 
Evelyn's cabinet follows the architectural style of the period,  and although its pieta dura plaques and bronzes were stock designs, not specially commissioned items, the whole would provide the essential showpiece furniture to amaze and amuse his friends and visitors.  The term 'cabinet', for a private room or closet, derives from the Latin for enclosed seats at the theatre, and a theatrical experience is what the display cabinet provides, as drawers and doors are opened to reveal yet more novelties.  The central arched door opens to show a bronze figure of Orpheus charming the beasts (like those on the exterior), with mirrors  enhancing the optical illusion.  The contemporary humanist would have appreciated the conceits linking art and nature, science and the classical world in the design of Evelyn's cabinet.

And why was the cabinet so decorated with extra gilt mounts in the 1830s?  It was following the publication of his famous Diary (i.e. his Kalendarium, a combination of notes and memoirs) in 1818, for this was considered to be the ebony cabinet in which his surviving manuscripts were discovered. 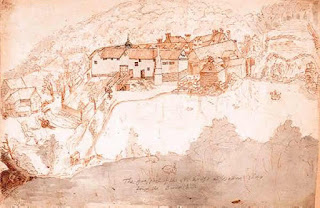 Drawing of the family house at Wotton by Evelyn, 1640
© The British Library

Librarian William Upcott was visiting Lady Evelyn at Wotton House in 1813,  and she showed him a drawer of old papers, some left over from cutting out dress patterns, saying, "Sylva* Evelyn and those who succeeded him kept all their correspondence, which has furnished the Kitchen with abundance of waste paper."  Upcott went away with more rescued bundles kept in "the ebony cabinet in the Billiard Room," and eventually  Evelyn's Diary was published by William Bray and Upcott .   Its public success led to the Keeper of the Library at Magdalen College, Cambridge, having the manuscript of Samuel Pepys' Diary deciphered and published in 1825.


*Sylva, or a discourse of Forest Trees, 1664  was Evelyn's comprehensive and influential work on arboriculture.

Evelyn quoted from The Diary ed. E.S.De Beer
Posted by E Berris at 09:33