"As we head back home, the children trailing their bikes behind them, the sunlight catches a small bird as it flies over the grassy field by Perry Road. It is a shape at once familiar, yet strangely unfamiliar, for I haven't seen it for almost half a year.  It is a returning swallow: my first of the spring…..

Years ago I stood on the volcanic island of Surtsey, off the south coast of Iceland, an island so new that it didn't even exist when I was born.  As I tried to come to terms with this disconcerting notion, I saw a swallow hawking for insects under sunny blue skies.  It was a true pioneer -- swallows do not even nest in Iceland -- pushing the boundaries of its range to seek out new places to live and breed. 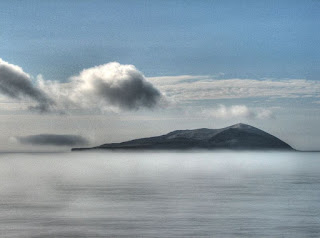 Over the years I have watched swallows crossing the Sahara Desert in Morocco, and the Negev Desert in Israel; alongside big game in the Masai Mara and Okavango Delta; at Cape May in New Jersey, and Punta Tombo in Patagonia.  In all these far-flung places I have experienced the same sense of wonder.  How can this tiny bird, weighing barely half an ounce, cross the world's continents with such ease?

That same wonder grips me today, long after the swallow has flown out of sight; and I await with delicious anticipation the return of 'our' swallows, currently somewhere to the south.  One day, during the next week or two, I shall hear that familiar twitter, as they swoop down to land on the telegraph wires beside our home.

Later that day, as I collect the Sunday papers from the village stores, I mention my swallow; and am told that Mrs Puddy has beaten me to it, having seen her first swallow here on the first day of the month."

[*Browning's lines run: "And after April, when May follows, and the whitethroat builds, and all the swallows!"]
Posted by E Berris at 09:16