As the dark evenings draw in, I thought it would be pleasant to remember the charms of summer with this view of the famous Vauxhall Gardens, especially for anyone queueing for buses or fighting onto trains at Vauxhall in the rush hour today. 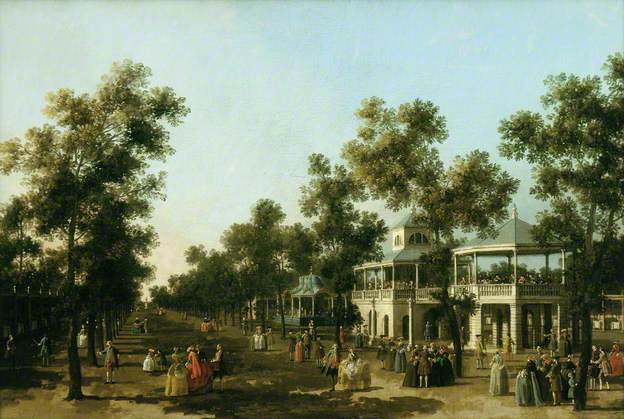 Visitors in the eighteenth century also complained about the traffic congestion, whether they came across the Thames by horse-ferry or drove all the way to London Bridge or darkest Putney --and still, after Westminster Bridge was built in 1750, "the tide and torrent of coaches was so prodigious" complained  Horace Walpole in 1769.  He and his friend, after much delay, ...."then alighted; and after scrambling under bellies of horses, through wheels, and over posts and rails, we reached the gardens where there were already many thousand persons".  They were "rejoiced to come away, though with the same difficulties as at our entrance; for we found three strings of coaches all along the road, who did not move half a foot in half-an-hour." 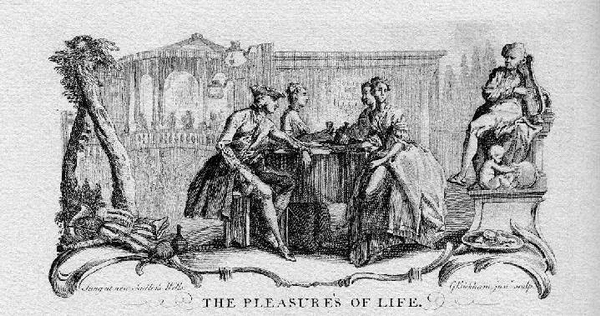 The gardens brought the arts and culture as well as entertainment to the general public, as in this engraving showing the iconic statue of Handel ( of 1738) which graced the entrance.  Horace Walpole's older brother was in part responsible, for when a young immigrant artist found Sir Edward Walpole's wallet on leaving the Gardens and returned it to him, Sir Edward found him a post working for the leading sculptor of the day, Henry Cheere.  The young immigrant, Louis Francois Roubiliac, who created this inventive portrait of the great composer,  soon became known for his celebrity portrait busts and monuments, which now grace Westminster Abbey, churches, universities  and many museums and institutions.


Vauxhall Gardens went in and out of fashion, with a range of entertainments, attracting the great, including royalty, and the less great, as George Cruikshank's comic illustration shows.  Perhaps James Boswell's  comment sums up the Gardens' long lasting appeal:

"Vauxhall Gardens is peculiarly adapted to the taste of the English nation: -- there being a mixture of curious show, -- gay exhibition, musick, vocal and instrumental, not too refined for the general ear;- for all which only a shilling is paid.  And, though last, but not least, good eating and drinking for those who wish to purchase that regale."
Posted by E Berris at 04:24