It was Queen Mary II who introduced the passion for blue and white china into Britain, when she and her husband William III came over from Holland in 1689 to take the English throne.  The appeal of blue and white probably culminated in the mass production of the transfer printed Willow pattern in the nineteenth century, which continues to this day*.  The collector who owned this elaborate Delft posset pot describes "the real charm and beauty of the ware is to be seen in its highest perfection in some of the pieces decorated only in blue upon a white ground".
This was Dr. James  W. L. Glashier, a mathematics  don at Trinity College, Cambridge,  lecturing to the Society of  Arts in 1897, and the posset pot features on his personal bookplate. 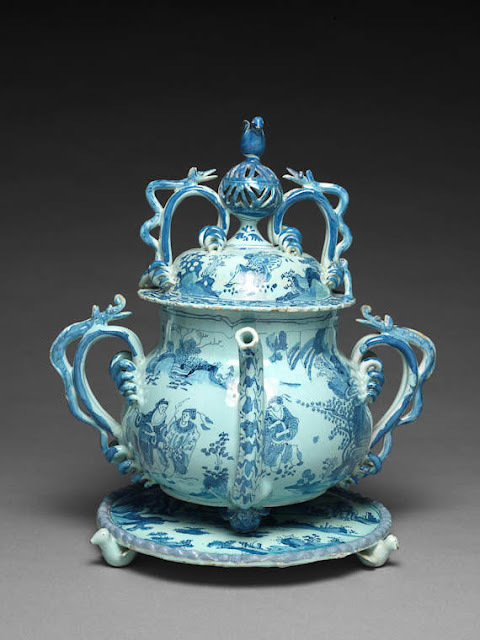 (Posset was a drink of warm milk with eggs, sugar and spices, curdled with wine or ale.) 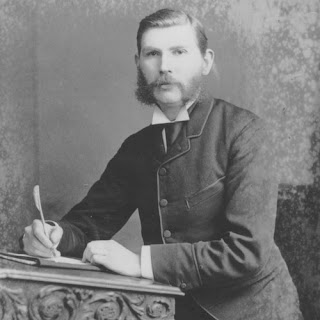 Dr Glaisher's father (also James) was a pioneering meteorologist and balloonist, who took his teenage son with him on two ascents,  and Dr Glaisher became a respected astronomer and was President of the Royal Astronomical Society for some years.  His collection contained several delftware plates commemorating early balloon flights, and this more unusual one from Bristol, dated 1740, (showing a holiday pastime in Teneriffe perhaps?).
It is based on a print illustrating "A Voyage to the Moone; or a Discours of a Voyage thither by Domingo Gonsales, the Speedy Messenger" of 1638.  The 'speedy messenger' was in fact Francis Godwin, Bishop of Hereford, and in his utopian story Gonsales describes how he harnesses wild swans to fly him to the Moon and back. 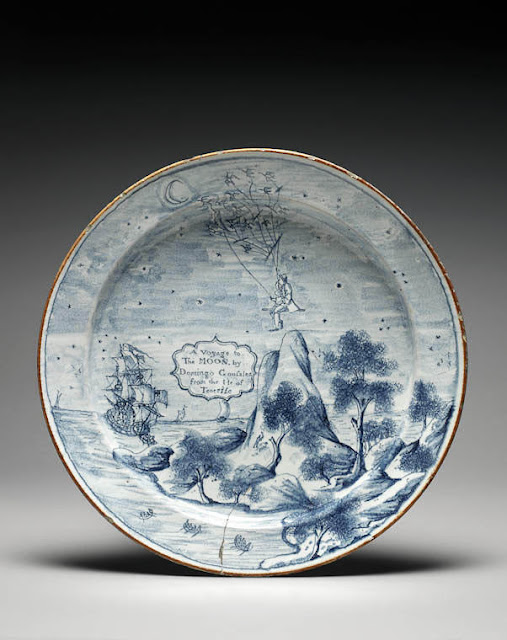 As a mathematician and astronomer, and Fellow of Trinity, Cambridge,  this figure of Sir Isaac Newton from his collection would have appealed strongly to him.  He also helped Trinity to acquire a key manuscript letter from Newton to Hooke, discussing how to measure the rotation of the earth. 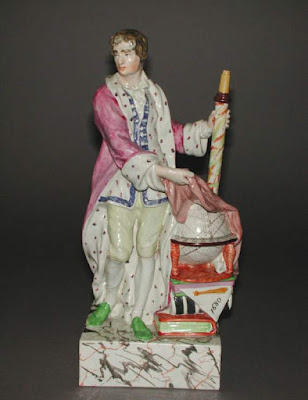 Glaisher had an extensive library of books,  collecting manuscripts and Georgian chapbooks as well, which he donated in his will to his college and to Cambridge University Library.  He was a wealthy bachelor and his collections filled his rooms at Trinity.  "His collections never ceased to grow….outgrew available space, upstairs, downstairs, even in his remote bedroom.  He was granted an additional set of rooms at the top of his staircase and next to the upper floor of his own set; they, too, soon were filled.  He then hired a sort of warehouse, that also became filled in due course.  …the Fitzwilliam Museum … granted him a room (also soon filled) in the new wing…" wrote J. J. Forsyth.

He travelled widely, from Egypt to the United States,  and added to his collections (which included early samplers and Valentines) wherever he went. 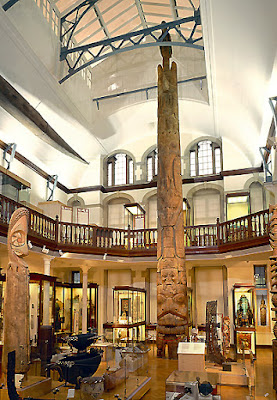 In Cambridge, Glaisher would not have seemed eccentric, riding everywhere on his penny-farthing bicycle,  chairing a stormy public campaign meeting for Emily Pankhurst in 1910, and buying this Haida totem pole from the anthropologist C. F. Newcombe, for Cambridge University's Museum of Archaeology and Anthropology, where it is the centrepiece of the display.

His carefully recorded collections of nearly 6000 pieces of European pottery and porcelain now grace the Fitzwilliam Museum for our enjoyment and study today.

(with thanks to Dr. Julia Poole for her articles)