Poetry, Pots, and a Parson 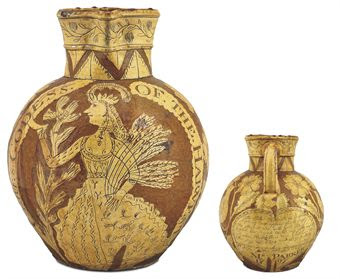 North Devon is known for its large honey-coloured Harvest Jugs, particularly the boldly decorated, signed and dated ones from the eighteenth and nineteenth centuries.  The patterns and the inscriptions were widely copied and imitated, and inspire potters today. "now i am com for to Supply your workmen
when in harvist dry they do labor hard and sweat
good drink is better far than meat; in wintertime when it is coold
i Likewise then good drink can hold: booth seasons doe the same require,
and most men doe good drink desire"

These West Country harvest jugs are often decorated with tulips and other flowers, birds, unicorns, and, reflecting their coastal origins, ships, compasses, suns and mermaids.  There were thriving potteries in Barnstaple and Bideford, where the Burton Museum & Gallery has a magnificent collection of plain and fancy pots,  bequeathed by R.J.Lloyd.

Here are some more examples: 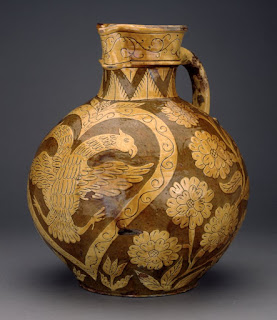 
"When I was in my native Place I was a lump of Clay
and Diged was out of the Earth and Brought from thence a Way,
but now I am a Jugg became by Potter's Art and Skiel
and now your Servant am Become and carry alle I will."

This one is much cruder, although the handle join is scrolled,  and its verse is more like a motto: 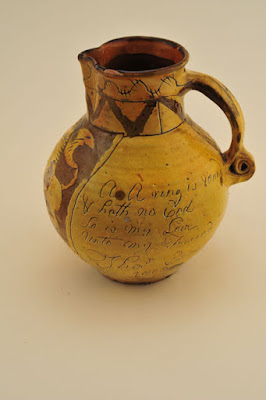 
Others celebrate Ceres, Goddess of the harvest*, or the Barley Mow: 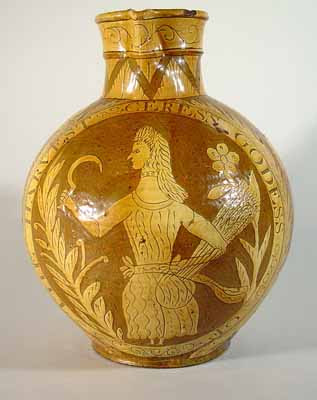 "harvest is come, all busy now
in making of the Barley mow
if you the Barley now neglect
you cannot then Good Ale Expect"
(signed T. Jones 1792)

"Despise me not because I'm made of clay -
But make me welcome when I come this way-
My belly fill with good strong punch (or beer) -
& I will make you merry all the year."


The inscriptions frequently are placed underneath the handle, which enlivens the simple flower pattern in this one below: 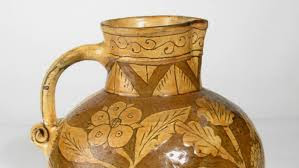 Its inscription is the most interesting part of this grand jug, as it commemorates an old West Country ritual, "Crying the Neck".


"The Potter fashioned me complete, as plainly doth appear
for to supply the harvest men with good strong English beer.
Drink round my jolly reapers and when the corn is cut
we'll have the other jug - and cry A Neck A Neck."

As the last sheaf is cut (by hand) the reaper holds it aloft and cries " I 'ave un, I 'ave un". His fellows shout "What 'ave ee? What 'ave ee?" to which he replies "a Neck, a Neck" and  "Hurrah for the Neck! Hurrah!"  This age-old pagan custom was revived by the Old Cornwall Society (and see strawcraftsmen.co.uk),  but the churches' Harvest Festival tradition was begun in 1843, by the eccentric Parson Robert Hawker of Morwenstow, North Cornwall.

A poet, antiquarian (and opium smoker?), he built himself a tiny bothy (National Trust's smallest property), reached by a track along the cliff edge, where he could write and watch for ships in danger from the precipitous rocks at Hartland Point. 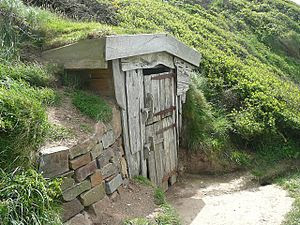 He rescued many seamen, and others are buried in the graveyard of his church of St John & St. Morwenna beside the vicarage at Morwenstow. It is worth exploring for its evocative headstones for the drowned sailors.  The Museum of Wrecks at Hartland Quay records the dangers of this coast, including an ill-fated aeroplane. 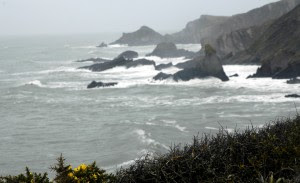 Parson Robert Hawker is best known for the Trelawney anthem,  --

"And shall Trelawney live? Or shall Trelawney die?
Here's twenty thousand Cornishmen shall know the reason why!" --
which he published anonymously in 1825 as The Song of the Western Men, basing it on old Cornish ballads for a new literary audience.

This is why the harvest jugs with inscriptions have so much more appeal for me, with their makers' initials and dates;  the earlier ones in particular are recording West Country oral history for us with all their craftsmen's skill.  This fine North Devon jug below is boldly decorated and glazed, but lacks the extra pleasure of these country rhymes saved by the potters. 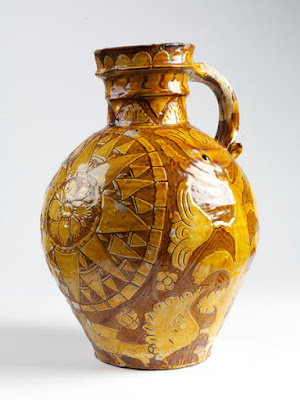 * see wikimedia for copyrights.
Posted by E Berris at 09:23