Shakespeare's Measure for Measure is a play full of moral ambiguity and vice, in which two virtuous women are threatened by hypocrisy and male power.  Isabella, a novice nun, must trade her virginity to save her brother's life,  while Mariana has been jilted for lack of her dowry, both at the mercy of Angelo, the outwardly upright Ducal deputy.
Elsewhere, Pompey the bawd, trying to make Mistress Overdone's brothel appear respectable to the officers,  describes how

"..she came in…longing for stewed prunes.  Sir we had but two in the house, which at that very distant time stood, as it were, in a fruit-dish, a dish of some threepence; your honours have seen such dishes; they are not China dishes, but very good dishes."  Measure for Measure Act 2, sc, 1. 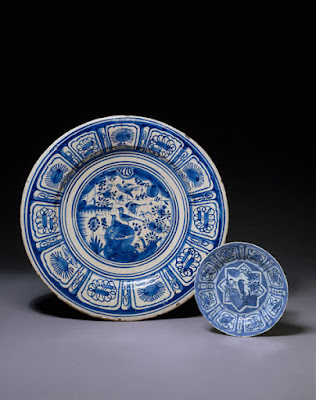 The first recorded performance of  Measure for Measure was for the Christmas Revels of 1604.  Ever up to date, Shakespeare's "China dishes" would surely be recognised by his elite audience as a reference to the spectacular sale of Chinese porcelain in Holland from captured Portuguese carracks in 1602 and 1603. One cargo alone contained 50 tons or 100,000 pieces of Chinese export porcelain. Before this, Chinese porcelains were exotic rarities, owned only by royalty and the very wealthiest of courtiers and Levant merchants.

Pompey's "very good (threepenny) dishes" might have been pewter, but more likely Dutch 'delft' - imitations of the imported 'Kraak' i.e. carrack porcelains, made of tin-glazed earthenware - liquid resistant, shiny and colourful but prone to chip and crack.  Some immigrant Dutch potters were making basic tin-glazed earthenwares in London from 1570s (especially smooth tiles and jars for apothecaries). The Museum of London has a large collection, many found in pieces in old cesspits. 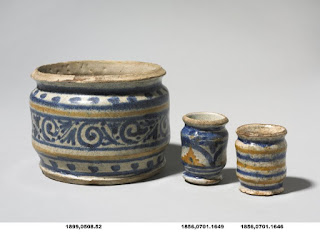 It was Italian potters who introduced the technique into Holland, for tin-glazing in Italy had reached a high art form in the early 1500s, with master potters decorating wares with scenes from history and classical myth in vivid colours (known as 'maiolica').  Popular display pieces were the coppe amatorie, stock  images of idealised beautiful women, inscribed with a name and flattering titles such as bella, diva, gracioza, galante. 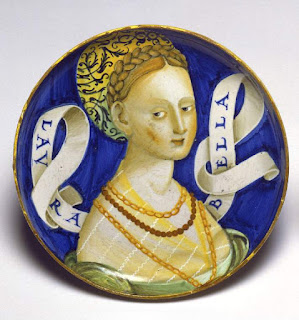 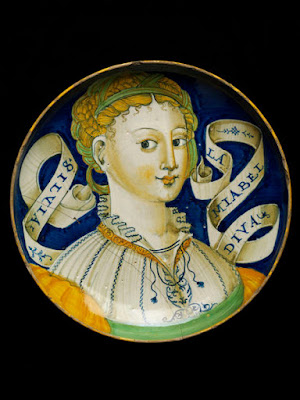 A modern feminist take on these idealised  "fair women" has been created by the Boston-born book artist, Angela Lorenz in 1993,  in her set of 6 collagraphed paper plates, framed and stored in a slatted crate.  She now lives and works mainly in Bologna, and this piece was inspired by these 'Belle Donne' images. 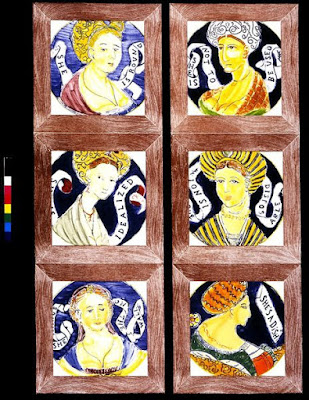 The six paper plates are variously labelled:
"She is round. She is idealised. She hangs on the wall.
She is not to be used. She is not disposable. She's a dish." 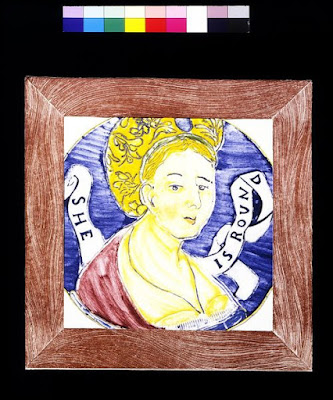 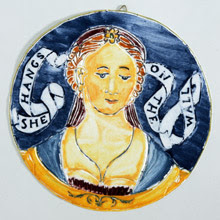 Each 'She' is in fact a dish of collaged spaghetti, sealed with glue and inked in typical maiolica colours, making a relief print in the style of those Renaissance fair women, now captured in their 16th century ceramics in museums across the globe.